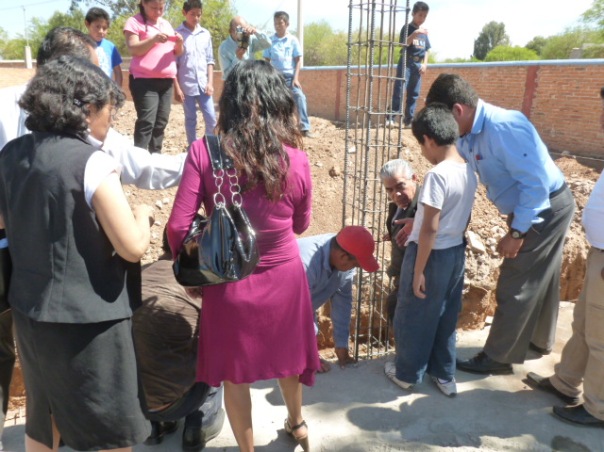 “No hay mal que por bien no venga” (There is nothing bad that something good cannot come out of it) is a widely quoted Mexican proverb which the Maravillas Disciples Church on the outskirts of San Luis Potosi, Mexico is now living out.  Since the collapse of their sanctuary roof on December 29 and subsequent demolition of the building, the congregation has been blessed with the prayers, offerings and presence of fellow Disciples in the area and beyond.

Last month representatives of the two largest congregations in San Luis Potosi brought $2500 to the afternoon worship service at Maravillas.  And Pastor Josue Martinez Cisneros, President of the C.I.C.E. Disciples churches assured the members more would be contributed.  The Global Ministries Executive for Latin America, Rev. Felix Ortiz, arranged for contruction advisor Jim “Santiago” Piper to spend four weeks helping with the design and planning of the new sanctuary.  Jim has now returned to Maravillas to assist with laying the foundation and putting up the new sanctuary’s walls.

These early signs of solidarity, fraternal love and support have enabled the congregation to make fast progress in the construction project.  “I am so 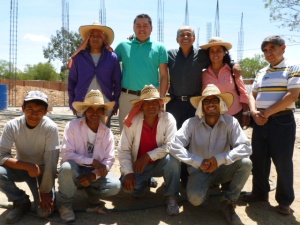 grateful for this unexpected, new opportunity to show our love for our Church and our God” Building Committee Chair Ramiro ­­Ortiz Pardo states.  And Pastor Rosendo Arvizu Avalos’ youngest child, 23 year old Alvaro, expects the project to result in deepening the congregation’s faith and commitment to serve.

On leaving for home in Caldwell, Idaho just before Easter Jim Piper was determined to return soon.  In addition to his satisfaction in helping the congregation plan the new construction, he expressed gratitude for the good care and tasty meals provided daily by church members.  “Their hospitality has been amazing” Jim declared on his return in mid April to San Luis Potosi and the Maravillas community.  “I have the time and I love it here.  How could I not come back?” he adds with a big smile as he chuckles.

The Maravillas congregation looks forward to welcoming other volunteers to participate in the new sanctuary project.  The distance from Los Angeles to San Luis Potosi is nearly equal to the mileage from LA to Kansas City.  And there are direct flights from Houston to San Luis Potosi.  Contact Jasmine Sanchez – jsanchez@dom.disciples.org or 317-713-2561 – in the Global Ministries Latin America office to discuss how your congregation or Region/Conference might help bring about new wonders in Maravillas. (see the blog of February 13 “New Wonders in Maravillas” in the Archives section of Erasing Borders)

Progress on new sanctuary building as of April 27

The Sanctuary of Maravillas on the outskirts of San Luis Potosi January 2, 2013

JIm “Santiago” Piper rode his way back to Maravillas from First Christian Church of Nampa, ID