A Mexican-American Family Responds to Nativists (Like the U.S. President) 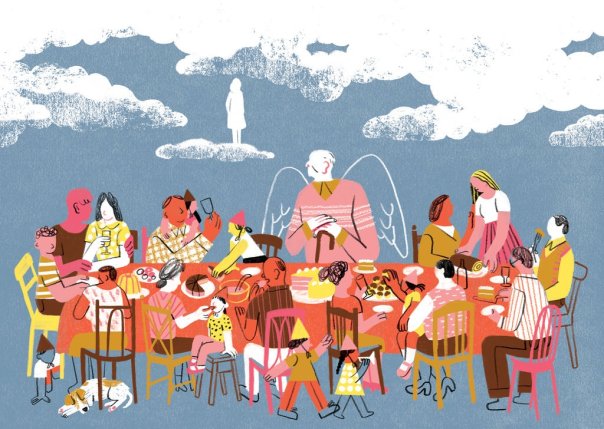 The novel’s De la Cruz family as imagined by Marta Monteiro. From the NY Times.

The House of Broken Angels is a novel that seems destined to further build Mexican-American writer Luis Alberto Urrea’s international reputation and readership.  Published in 2018, Urrea’s novel was glowingly reviewed by the Vietnamese-American novelist Viet Thanh Nguyen in the New York Times and is the Times-PBS “Now Read This” July Book of the Month selection.

Urrea was born in Tijuana to a Mexican father and an American mother and went to college in San Diego.  Though identified as a “border writer” his website quotes him saying, “I am more interested in bridges than borders”.  Like the filmmaker Alfonso Cuarón with the Academy Award winning “Roma”, Urrea’s work represents a clear window through which Mexican culture and family life can be viewed and a “bridge” is built between the U.S. and Mexico.  It was inspired by the death of his older brother from cancer.  He says on the Times book review podcast that his family threw a 70th birthday party for his brother, “his last birthday party on earth”, as the de la Cruz family does for the family patriarch in the book.

Another strong motivation in writing the book was political –  particularly the anti-immigrant rhetoric of the Trump 2016 campaign.  “The subtitle of the book should be ‘Go to Hell, Donald,’” the author told an interviewer.   He went on to say, “I couldn’t any longer take all the rhetoric, I couldn’t any longer take all the ‘build-the-wall’ propaganda or the ‘bad hombres’ and all of the damage and harm and heartbreak this course in American politics is taking in people’s lives on a daily basis.”     It is the author’s humor and love for all kinds of people that stand out and stay with Urrea’s readers.  He says that after his public readings from the book, “I’m hugging a lot of people. Every night, my jacket smells like 14 perfumes and seven after-shaves. People want hugs.”

New York Times review in March 2018 of The House of Broken Angels  :

“Now Read This” NYTimes-PBS Facebook group discussion of The House of Broken Angels :

Urrea talks about why he wrote the book with Pamela Paul on the New York Times Book Review podcast:

Tags: Portrait of a U.S. Immigrant Family, The Politics of The House of Broken Angels