We Are All Aliens

We in the United States today are battling over what it means to be an American. The battle and the divide is taking place in many settings: in Congress, in the nation’s courts, at the airports, in the streets and most heatedly at our national borders. The conflict has been going on for many years but today with a President insisting on a narrow, exclusionary understanding of “American” the battle has intensified.

We lament the suffering of individuals and families caused by the current Administration’s aggressive pursuit of the “undocumented” while deploring his Republican Party’s standing in the way of comprehensive reform of the nation’s immigration laws for over 30 years. In effect, their stonewalling has made millions living and working in the country for many years “illegal” by their definition of “American”. Immigrants living in this country for twenty years and more have been barred from a pathway to U.S. citizenship.

In a time of unprecedented migration of refugees worldwide, some politicians may reap short term gains from their position on immigration; the anti-immigrant sentiment has swept Europe and undoubtedly contributed to the Trump electoral victory. His party blocks the path to citizenship for immigrants while engaged in a nationwide campaign to restrict and suppress the right to vote of persons of color who are U.S. citizens. This is a short sighted political strategy doomed to fail because it ignores, disrespects and ultimately devalues the nation’s highest ideals.

There is no denying that the U.S. is a nation of immigrants from all over the world. Except for the natives the immigrants displaced, all citizens of this country are descendants of people bringing to this land hopes and dreams forged on the anvil of oppression elsewhere. Whether one lives in the Middle East, Central America or West Africa, yearning to breathe free of violent oppression is not just the story of persons immigrating to the U.S. It is the human story and is a component of the DNA of the human species.

We citizens today of these United States are descendants of Jews fleeing persecution and death in Germany, Irish survivors of spreading famine, Mexicans and Central Americans escaping violence and feudalistic exploitation, English, Scots and Irish seeking religious freedom. So for two hundred forty two years the U.S. has been living a national experiment to remain true to its identity, its self image as a refuge for those storm tossed and “yearning to be free”. As a result of earth’s inhabitants finding safe harbor over decades in this country, the name “America” took on sacred levels of meaning for the country’s citizenry. The origins of the name, however, remains another cause for dispute.

Whether or not the name “America” derives from the name of the explorer Amerigo Vespucci, it is indisputable that the name originally applied to both North and South America. Vespucci himself never set foot on North American soil. A recent writer on the origins of the name “America” notes that the name came to apply solely to the United States after so many nationalities settled in the country and referred to the country in their language as their homeland. Jonathan Cohen writes, “to hear the African in the Mayan iq’ amaq’el; to hear the Scandinavian Ommerike, as well as Amteric, and the Algonquin Em-erika; to hear Saint Emeric of Hungary; to hear Amalrich, the Gothic lord of the work ethic; to hear Armorica, the ancient Gaulish name meaning place by the sea; and to hear the English official, Amerike — to hear such echoes in the name of our hemisphere is to hear ourselves”.

To hear the name one also hears echoes of the leaders who have shaped the values and self-image of this nation. Ted Widmer in a 2012 opinion piece titled “Last Best Hope” tells us it was Thomas Jefferson, drafter of our Declaration of Independence, who described America as the “world’s best hope”. Widmer then notes that “Like Jefferson (as Western as he was Southern), Lincoln believed that America’s ample interior spaces would invite millions of immigrants from around the world.” 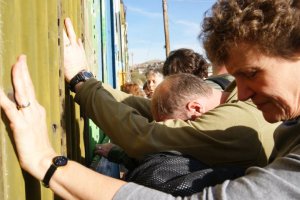 For Lincoln, according to Widmer, the fact that immigrants continued to pour into the country during our Civil War, with many enlisting in the Federal Army, served as validation for Lincoln’s belief “that America, for all her problems, was still worth fighting for”. Lincoln concluded his first State of the Union message with words that link the freedom of the slave to the freedom sought by U.S. refugees and also speak to what is at stake for the country in his times – and in our own: “In giving freedom to the slave we assure freedom to the free — honorable alike in what we give and what we preserve. We shall nobly save or meanly lose the last best hope of earth.”

So in our national debate over immigration in these times we are not involved in just a policy discussion. For many of us seeking to defend the right of persons fleeing oppression by extreme economic exploitation and autocratic rulers we seek to defend the best of what this country has offered. We seek to preserve the essence of what enables its description as “a great nation”. We seek to preserve the country’s soul.

Extreme economic inequality, attacks on Muslims, imprisoning and deporting refugees, suppressing the right to vote of U.S. citizens, I could go on but we all recognize multiple ways the “American dream” is fading away in our time. For many of our citizens, there is doubt the dream for them and most others will ever be restored. In acting on behalf of refugees’ rights today, we are reminded and bolstered by the realization that it is not just an “American” dream to live free of persecution and exploitation. It is a human dream. And it is a dream that makes the U.S.A. – and any other people struggling for human freedom – “the last best hope on earth”.

Tags: Immigration Policies and the Soul of America, Origins of name "America", Who is American?