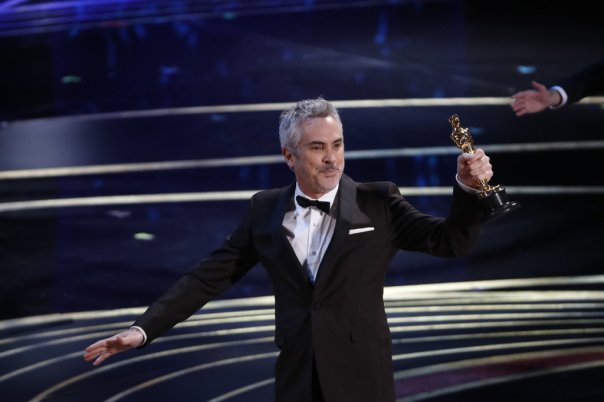 At the Oscars this year Alfonso Cuaron’s almost became the first “foreign film” to win the Best Picture award. Photo by West of the NY Times

Zorba in Zorba the Greek , Auda abu Tayi in Lawrence of Arabia, Paul Gauguin in Lust for Life, Zampano in Fellini’s La Strada – Anthony Quinn was Mexican-American. He was born to a Mexican mother and an Irish father in the Mexican State of Chihuahua during the Mexican Revolution.

Working in East Los Angeles, I was surprised to learn Quinn grew up as a Mexican immigrant in the Eastmont Community Center neighborhood. The Anthony Quinn Public Library on East Third Street is located on the corner where Quinn’s childhood home stood. But Quinn paid little attention to his Mexican heritage in his life or his acting career. His 1952 Oscar-winning role as Emiliano Zapata’s brother in Viva Zapata was one of the very few he took playing a Mexican.

I also learned that children in the schools Quinn attended had been punished for speaking Spanish in the classroom. Anthony Rodolfo Quinn (paternal surname) Oaxaca (maternal surname) was taught that to get ahead in the U.S. you had to assimilate, leave behind your culture of origin and become “American”.

Having financed Roma with his own production company, Alfonso Cuaron left no doubt it was a Mexican film. “It doesn’t exist without Mexico” Cuaron emphasized on Oscar night. The same could be said of other enduring films like The Treasure of the Sierra Madre, Night of the Iguana , and The Wild Bunch. But Roma uniquely was made in Mexico with a Mexican cast and crew speaking Spanish and Mixtec.
The film also was made first and foremost for Mexican audiences. Alfonso Cuaron implied as much when in the post-awards press conference, he stated that he was most gratified by how the film had generated a national conversation about the rights of domestic workers and racism in his Mexican homeland. He also mentioned that he was proud to have strengthened the organizing and outreach of two groups, one in the U.S. and the other in Mexico, who are working on behalf of domestic workers like the protagonist of his film.

All the heralded immigrant Hollywood filmmakers – Fritz Lang, Billy Wilder, Ernst Lubitsch, Alfred Hitchcock – helped U.S. audiences understand the U.S. better and, in some cases, revealed for us what others don’t want us to see, as Cuaron put it on Oscar night. But the director of Roma is the first immigrant filmmaker to focus on his childhood homeland for his setting, his themes and inspiration and for the audience he wanted to reach above all. There is no doubt that Roma belonged in the Oscars’ Foreign Film category.

Roma has now raised the question of when the top award at the Oscars will go to a foreign film. Hollywood insiders have said Cuaron’s film came very close this year. With movies making more money overseas and some even premiering outside the U.S., this Mexican film signals an important, new advance in the globalization of the U.S. film and television industry. When a foreign film finally wins the Best Picture award, Oscar voters will be highlighting and celebrating movies’ potential to communicate with audiences all over the world as well as the domestic U.S. audience.

For those of us who have experienced a film’s potential to deepen our understanding and appreciation of other cultures, Roma’s success is

Mexican star Cantinflas was inspired by Chaplin’s “The Tramp” in creating his film persona.

very good news. But it could also be said that the Netflix’s huge investment in distributing and promoting Cuaron’s film is not the first instance of Hollywood money scoring a hit financially and among critics with a “foreign” made film. The first major star of Hollywood movies was the English immigrant Charles Chaplin whose character The Tramp was recognized and loved worldwide. U.S. film historian Andrew Sarris called Chaplin’s character “cinema’s most universal icon”. There is a street in Belgrade named for Charlie Chaplin and no other film star has had as many commemorative postal stamps issued in their honor by countries on six continents.

During the era of silent movies, Chaplin’s Tramp succeeded in communicating powerfully with audiences around the world. It is worth mentioning here that the first couple of minutes of Cuaron’s motion picture is silent. By filming the chores of a domestic worker, Cuaron was able to touch audiences in a way that even surprised the filmmaker. “I least expected it (Oscar recognition) for this movie” Cuaron said in the post-awards press room. We all can attest that a kind of mysterious magic is at work in the best films. At the 1972 Oscars when Chaplin made his first U.S. appearance after a 25 year exile abroad the audience stood and applauded for eleven minutes. They stood in awe of Chaplin and in awe of movies’ potential to move us and remind us of what makes us all human.

Posted on March 4, 2019, in Mexican Directors' Impact on Hollywood, Movies made in Mexico and tagged Anthony Quinn and East LA, Roma and Globalization of Hollywood Filmmaking, Roma Impact on U.S. Film Industry. Bookmark the permalink. Leave a comment.