On Violence and Love in Mexico 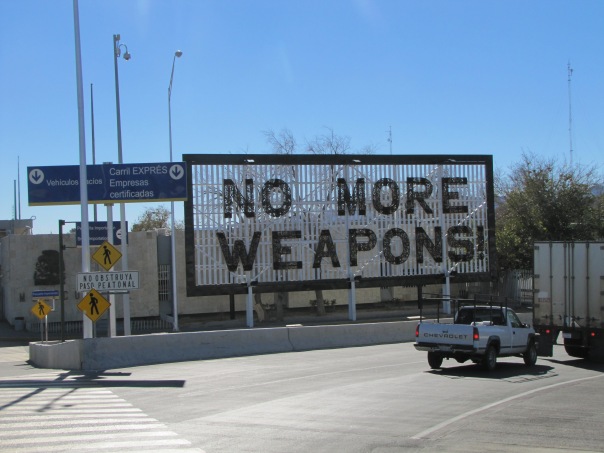 Sign made of confiscated firearms in the Mexican border city of Ciudad Juarez. Photo by Monica Ortiz Uribe of Fronteras

The major difference between the sub-cultures dedicated to violence in Mexico and the U.S. is that virtually every family in Mexico has been affected in some way by the “inseguridad”/insecurity that hovers over many areas of the country. Travel routes are determined by the reports of “incidents of insecurity” on certain major highways. Precautions are taken such as not driving at night on any highway especially in rural areas and one is advised to stop for no one on any highway at night or daytime.

We’ve been living here for just a year now and yes we know the effects of the rise in violence. The brother of a close friend was kidnapped for ransom recently in a neighboring state but, thanks to the quick response of his family, was released unharmed two days later. Our friend was terribly shaken by the family’s ordeal and Kate and I are still involved in finding ways to express our love, concern and support.

A few days ago a friend in the U.S. asked in an email what the church here is doing to respond to the rise in insecurity and violence in Mexico. She also asked, “Is there a way we could work together on this?”

After wondering if we had anything to say on this, two responses of the Disciples and UCC churches to the “insecurity” need to be mentioned. First is the fact that the churches are not intimidated in their work by the violence we read about on a daily basis. No meetings have been cancelled, no 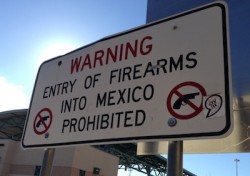 trips curtailed, no programs avoided because of the climate of violence.
Last year a van loaded with Disciples from Ciudad Juarez headed at night to San Luis for the men’s convention but was forced to stop by a roadblock and personal items and the van were stolen. Unhurt, the delegates returned home by bus. This year, undaunted by the losses of the previous year, an even larger delegation of men and women drove from Juarez for the Disciples Church’s annual convention.

The source of the coffee marketed by San Luis Potosi Disciples women, in an ambitious “microenterprise” project, comes from the most dangerous area of the State. Although the coffee is grown by Disciples women in a region where drug cartel reprisals have taken place, we have not heard a word about the danger faced by the women traveling there.

Secondly, the Church here helps life go on with the regular round of holidays and traditions in a way that celebrates the presence with us of the one whose “perfect love drives out fear” (I Jn 4:18). In this regard, we think of Pastor Victor and wife now living and working in Villa Union, a devastatingly poor community on the outskirts of Mazatlan, Sinaloa. Most youth in that community, Pastor Victor told us, see two options for their lives: seasonal netting of shrimp or low level involvement in the drug trade. Victor and his spouse hope to broaden the youth’s vision for their lives. One new opportunity they began to offer on moving to the community was training in music. Other Congregational Churches in Sinaloa, the state with the oldest -and biggest?- drug cartel in Mexico, are involved in serving families most vulnerable to use of drugs and involvement in their trade.

Women in several Sinaloa Congregational churches have started small businesses with funding support from Global Ministries. The Mazatlan Church carries out an array of programs serving the poor, free health consultations among them. So life goes on in Sinaloa and other states of Mexico in part thanks to the dynamic witness of our partner churches in regions primarily known in the U.S. for their drug trafficking and incidents of violence.

In these partner churches, babies are dedicated, marriages performed, birthdays acknowledged and the Communion of the Lord’s Supper is celebrated. In a sense, all of those who participate in worship here are declaring that love triumphs over fear. As communities of faith representing that “good news”, Church members are also prepared to enfold those who do experience loss and trauma with a witness to God’s love. Thanks be to God!

P.S. : We were pleased to learn recently that the popular U.S. cruises from Los Angeles and other West coast cities to Mazatlan will resume next year after a three year hiatus.
******** ******* ******* ********
I P 3:14-15: “Do not fear what they fear, and do not be intimidated, but in your hearts sanctify Christ as Lord. Always be ready to make your defense to anyone who demands from you an accounting for the hope that is in you.”

The blog title harks back to an ancient Church history document, The Address to the Emperor Diognetus reporting on the lives of third century Christians in Asia Minor: “They live in their native lands but like foreigners…They take part in everything like citizens and endure everything like aliens. Every foreign country is their native land and every native land a foreign country…. They remain on earth but they are citizens of heaven.” Kate Moyer's wedding present to Doug Smith of a dancing jester figure bore the quote, “I like geography best, he said, because your mountains and rivers know the secret. Pay no attention to boundaries.” They dedicate this blog then to helping bring about the day when human beings share the resources of the planet equitably and without borders. Our geography experience features childhoods in the Midwest. Kate lived for over twenty years as an adult in the small town of Neodesha, Kansas while Doug has been an urban dweller all his adult life. She is able to readily identify most crops and keeps a close watch on her partner’s snob tendencies. The Nile Valley of Egypt, for Kate, and the Congo rainforest for Doug have left deep marks on their interior landscapes.
View all posts by erasingborders »

Posted on November 20, 2013, in Uncategorized and tagged Evangelical response to Mexican violence, Gun laws in Mexico, Mazatlan cruises to resume. Bookmark the permalink. Leave a comment.