← “For the Honor and Glory of God”
Maravillas Welcomes You → 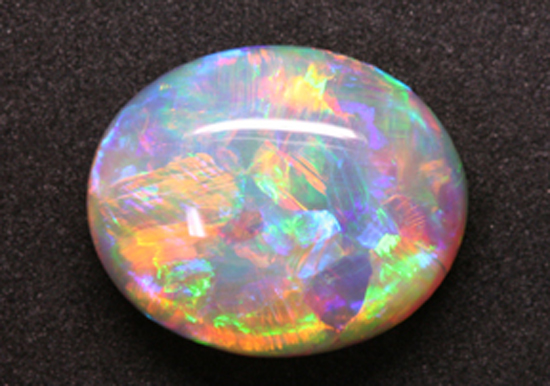 A “fire” opal from Magdalena, State of Jalisco, Mexico

“Set up road markers for yourself,
make yourself signposts;
consider well the highway,
the road by which you went.”  Jer 31:21

“Pilgrimage” is a theme of any trip through the Mexican state of Jalisco.  The presence along the highways of clusters of people walking or lone trekkers headed to the San Juan de los Lagos shrine begs us to consider the aim or aims of our own journey.  “What does the Lord require of us” we wrote after our first trip to visit Congregational churches in Jalisco state.  It was a different kind of pilgrimage this trip. If, as the saying goes, you make your way by walking it, can you also make a pilgrimage by “following your bliss”?  After this last trip, we think so.

Last week on our way through Jalisco to visit churches in Tepic and Acaponeta in the state of Nayarit, we passed by the town of Magdalena.  No signs or billboards advertise that it is now the opal mining center of Mexico but Kate had stayed nearby twenty years ago.  In telling about that past Mexico trip she has often mentioned the opal tailings brought back from a visit to Magdalena by others in her group and how she hoped to visit the town herself some day.

On our return home, we couldn’t pass up the opportunity so we pulled off the tollway for some touring of the Mexican opal capital and some “comida” dining at the appropriate time of 3:30 pm.  At the first stop of Opalos Mexico, we learned that to the Romans, the opal was more highly prized than the diamond and that Marc Antony had connived to secure a magnificent opal for Cleopatra.  We also learned that Lupita’s was the place to eat and that proved to be sure advice.

While Kate and our traveling companion Ana Yolanda Gutierrez looked for opals, Doug continued the conversation Kate had begun in English with a 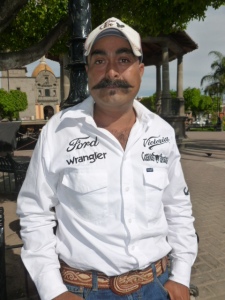 Humberto – from a village near Magdalena via Alaska

man in the town plaza.  Humberto was unmistakably Mexican with a groomed Zapata mustache and a wide “charro” belt.  He was vacationing in his home village near Magdalena after 8 years of working on a cruise liner in the waters of Alaska.  Two years working in the kitchen in a Japanese restaurant in Los Angeles led the owner to recommend him to his brother for the job in Alaska.

Doug congratulated Humberto on the mustache and asked if he sported the same look in the States.  “Why sure”, he replied, “I get a lot of compliments on the mustache in the north too.” When Doug next admired the belt he began to take it off and offered to give it to him.  After remarking how much better it looked on someone with a mustache like his, it occurred to Doug that something beautiful about the culture he was living in had just been revealed to him.

There was more to ponder in the opal shop where the women had found the array of stones and the ambiance they were looking for.  Three young men were working on the delicate task of freeing multi hued opals from the rock they are encased in.  The volcanic conglomerate is also sold in small chunks some of whose bits of opal glint as they reflect the light.  The shop workers told us the Aztec name “hummingbird stone” refers to the gem’s iridescent qualities. We were shown a variety of gems that had been shaped and polished including one of the “fire opal” type whose dazzling properties derived from “the waters of paradise” according to the Maya.

On leaving the shop, Doug was offered a sack of at least five pounds of conglomerate for 100 pesos (about $8).  He couldn’t pass up the opportunity to discover the colors hidden within the rocks inside the sack. It would take some effort but that may be the learning, one of the gems, revealed in this latest pilgrimage. We all left pleased that Kate had finally been able to make the trip to Magdalena.

The sack of opal encrusted conglomerate shown off by Yolanda, “Yolie”, and Kate

Pastor Julio and wife Rosa in the Congregational Church of Acaponeta

Family Doctor Dr. Gonzalez Chavez with Acaponeta youth leader Nestora who begins studies for a medical degree in the fall

This amaryllis bloom, our first white ones, surprised us at home on our return

← “For the Honor and Glory of God”
Maravillas Welcomes You →