← A Mexican Counter Culture
Thankful for Friends, Old and New! →

The Cloud of Witnesses 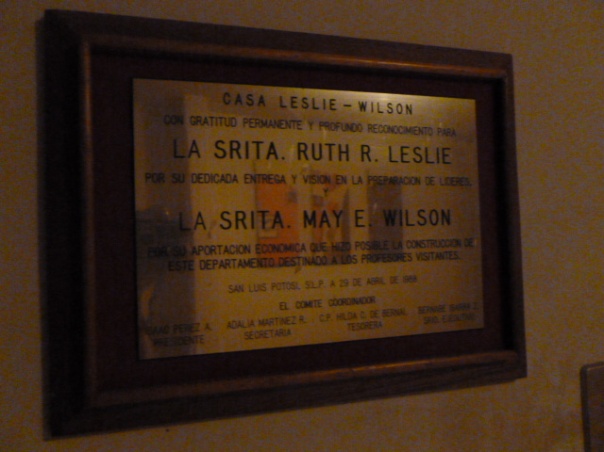 “Therefore since we are surrounded by so great a cloud of witnesses, let us also lay aside every weight and the sin that easily distracts and let us run with perseverance the race that is set before us….”  Hb 12:1

In our border crossing on October 16, thoughts of the host of missionaries sent here by the Disciples Global Ministries’ office in the past accompanied us.  I count a total of 108 missionaries to Mexico in May Wilson and Ruth Leslie’s list in The History of the Disciples in Mexico published in 1970.  So we crossed into Mexico with the prayer that our presence and our work will honor the legacy of their crossings and what they accomplished here.

To lift up their work in the community centers, orphanages, schools, and hospitals as well as sharing news of the churches the missionaries helped to found will be a focus of our ministry.  A source of pride and encouragement in our ministry will be knowing that Disciples missionaries built the leading hospital in Aguascalientes, now a city of a million people. And that the community center started by the Disciples in Piedras Negras was praised by Mexican President Carranza as a model social service agency for the country.  There will be many occasions for thanksgiving for the work of past missionaries and to consider our presence as somehow continuing and building on their contributions.

Every day as we enjoy the spacious home we live in, there is cause to be grateful for the Huegel family’s work here. The son of Disciples missionaries in Mexico, John Huegel, along with Rev. Isaac Perez, helped build the house and the seminary compound surrounding it.  What a joy it was to learn of his father’s influence on a young Hemer E. Sierra Silva, now a leading member of Central Christian Church in San Luis Potosi.

“I owe everything I am to the Disciples” Hemer told me on first meeting him.  “My father was a

Communist and my mother a devout Catholic” he began.  He says at age 15 he was at risk of wasting his life until a friend invited him to a Disciples youth retreat led by Frederic Huegel, John Huegel’s father.  What he heard there made him want to hear more about the “evangelical faith”. Through participation in Central Christian Church’s youth group, he was converted to “living in Christ”. Another missionary’s connections enabled Hemer to study chemical engineering at Oklahoma State.  Now retired from a career in management with PEMEX, the state owned oil company, Hemer’s wife, son and daughter all are active participants in San Luis Potosi’s Central Christian Church.

The authors of the Mexican Disciples history, and the missionaries with the longest term of service, Ruth Leslie and May Wilson, served in the Church’s social service agencies 38 and 42 years respectively.  On retirement, they settled in Guadalajara where the Congregational Church of Mexico (affiliated with the UCC in the U.S.) benefited from their involvement.  Their book is dedicated to “The Association of Christian Churches (Disciples) in Mexico and to their Servants that in the Past, Present and Future Have Dedicated and Will Dedicate Their Lives to the Growth of the Church in this Country”.

As “Consultants” with the Roundtable of the Disciples and Congregational Churches in Mexico, we

are honored and humbled to include ourselves in the book’s dedication.  As the first missionaries to serve in the Disciples’ heartland of San Luis Potosi and Aguascalientes since John and Yvonne Huegel left in 1995, we are compelled and excited by the opportunity to revive the historic ties of churches in our two countries.

← A Mexican Counter Culture
Thankful for Friends, Old and New! →