Cellist Yo Yo Ma on “Open Borders” 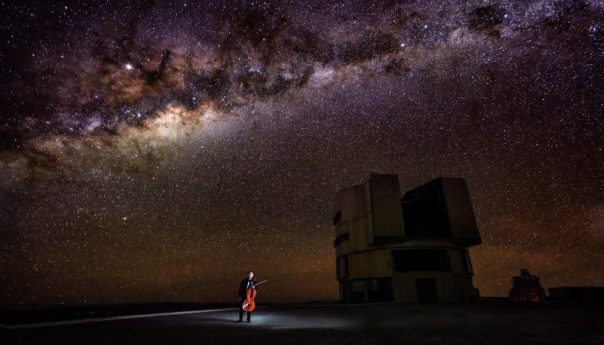 One of 36 solo concerts by cellist Yo Yo Ma took place at the southern Chile observatory, the most powerful in the world. With his two year Bach Project the musician declares, “We are all cultural beings – let’s explore how culture connects us and can help build a better future.”

In April of this year, world renowned cellist Yo Yo Ma played a Bach suite for solo cello in Nuevo Laredo, Mexico at the border crossing to the U.S. For an audience filled with persons who daily cross the border to the U.S., the Chinese-American musician noted how his own personal life and his art have been about crossing borders. “I’ve lived my life at the borders between cultures, between disciplines, between musics, between generations.”

Ma had planned to play the concert on the bridge linking the U.S. and Mexico but the U.S. Customs and Border Protection would not approve it. In a Laredo interview he responded to a recent statement by the U.S. President that the country was already “full”.  Ma asserted,“A country is not a hotel and it is not full”.

Designated by the United Nations as one of its “Messengers for Peace”, Ma will play the Bach six suites for solo cello in 36 locations on 6 continents over a two year period. His web site describes the mission of what he calls The Bach Project, “The shared understanding that culture generates in these divisive times can bind us together as one world and can guide us to political and economic decisions that benefit the entire species.”

Watch an excerpt here of the Nuevo Laredo, Mexico performance filmed and commented on by Texas Public Radio:

Tags: Cellist Yo Yo Ma playing for peace, US - Mexico border crossing at Laredo, Yo Yo Ma and "The Bach Project", Yo Yo Ma as UN "Messenger for Peace", Yo Yo Ma concert in Laredo