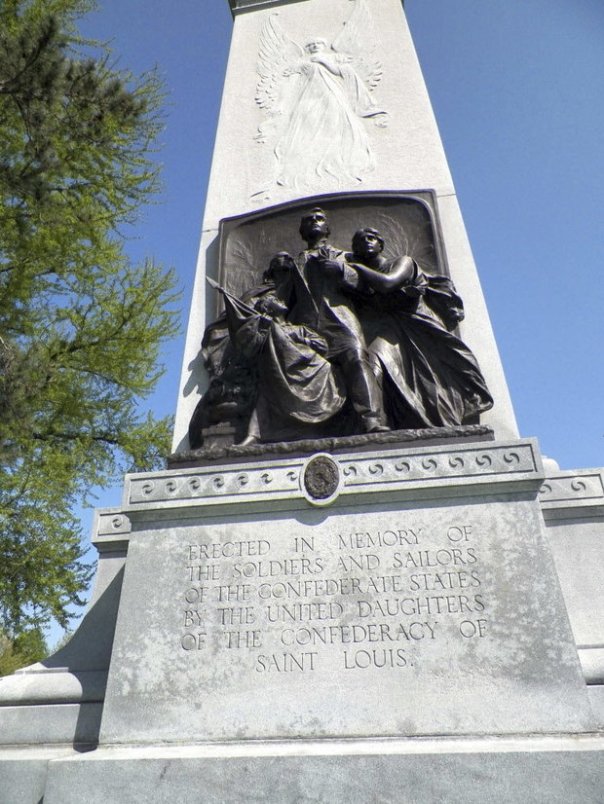 This 32-foot high granite monument honoring Confederate soldiers and sailors has stood in St. Louis’ Forest Park since 1914. St. Louis may soon join the growing list of cities removing monuments to the Confederacy. On the State Line dividing the free state of Kansas and pro-slavery Missouri, Kansas City has no such monuments. (AP Photo/Jim Salter, File)(Jim Salter)

The election of Donald Trump as President of the U.S. has resulted in a flood of commentary in all types of media on the topic of “American identity”. Discussions of “American exceptionalism” (referred to in the last Erasing Borders posting) are just one direction the national soul-searching has taken in response to Trump’s election. Taking a different path, the New York Times columnist David Brooks preferred to discuss the varied “American narratives” in a May 26 column.

What all commentators have in common is the sense that this nation is more fragmented today than anyone has experienced in their lifetime. The consensus prevails that the U.S. is a divided nation and that the Trump election has deepened the lines of division and, it is widely agreed, made those divisions more volatile and dangerous.

In describing four disparate narratives of how the U.S. is seen by its citizens, Brooks comments on how varied they are, “we’re suffering through a national identity crisis. Different groups see themselves living out different national stories and often feel they are living in different nations.” Brooks, however, ignores the deepest division with a history longer than the founding of our nation.

The division between those in this country who, unconsciously or consciously, still cling to racial views and fears which originated during the era of slavery and those who defend equality and the equal rights of all is being addressed at this time like never before. How the white supremacist views used to justify slavery relate to the anti immigrant, “make America great again”, “America first” policies that helped elect Trump is also being addressed. We recall that it was not much more than one hundred years ago that there were Harvard professors, with mainstream followings, who argued that some races were intellectually inferior to whites. We all are more aware now that the coddling of southern States to induce them to join the 1776 union, through the electoral college and other provisions of the Constitution, has compromised our nation’s moral and political recovery following the horrors of the Civil War and the depravity and eventual decline of an economy built on slavery.

We are also more aware that there are white persons in the northern and southern U.S. who in one form or another

Former Alabama Senator Jeff Sessions, now Trump’s Attorney General, is one of many southern politicians whose political career has served to bolster the white nationalist ethos in the U.S.

still cling to the Confederacy’s propaganda for the Civil War. So it is both hopeful and timely that the Mayor of New Orleans firmly denounced sympathy for the South’s lost, bygone cause in a recent speech. If the U.S. finds itself in an identity crisis today, as Brooks says, this speech is the most hopeful sign in these times that we as a nation are maturing and emerging into responsible adulthood.

After the New Orleans City Council voted in 2015 to remove all the city’s statues honoring southern heroes of the Civil War, Mayor Mitch Landrieu delivered the speech last month following the displacement of the renowned General Robert E. Lee’s statue. “The Confederacy”, the Mayor declared, “was on the wrong side of humanity”. The Mayor summed up what the removal of the statues meant for the City, the South, and the Nation with these words,

“This is however about showing the whole world that we as a city and as a people are able to acknowledge, understand, reconcile and most importantly, choose a better future for ourselves making straight what has been crooked and making right what was wrong. Otherwise, we will continue to pay a price with discord, with division and yes with violence.”

The speech included reminders of two facts of the city’s history for the audience and for the nation. First was a reminder of the founding principle of the Southern Confederacy.

“…..the Vice President of the Confederacy, Alexander Stephens, made it clear that the Confederate cause was about maintaining slavery and white supremacy. He said in his now famous ‘cornerstone speech’ that the Confederacy’s “cornerstone rests upon the great truth, that the negro is not equal to the white man; that slavery — subordination to the superior race — is his natural and normal condition. This, our new government, is the first, in the history of the world, based upon this great physical, philosophical, and moral truth.”

Secondly, he celebrated the variety of cultures represented by those who have built the city and called New Orleans “home”.

“You see — New Orleans is truly a city of many nations, a melting pot, a bubbling caldron of many cultures. There is no other place quite like it in the world that so eloquently exemplifies the uniquely American motto: e pluribus unum — out of many we are one.”

And then, like in a great sermon, the Mayor moves and convicts us by recounting a personal experience:
“Another friend asked me to consider these four monuments from the perspective of an African American mother or father trying to explain to their fifth grade daughter who Robert E. Lee is and why he stands atop of our beautiful city. Can you do it? Can you look into that young girl’s eyes and convince her that Robert E. Lee is there to encourage her? Do you think she will feel inspired and hopeful by that story? Do these monuments help her see a future with limitless potential? Have you ever thought that if her potential is limited, yours and mine are too? We all know the answer to these very simple questions. When you look into this child’s eyes is the moment when the searing truth comes into focus for us.”

As citizens of the nation founded on the “truth” that “all men are created equal”, we know in this era of Trump that we each of us are responsible for making real and living out this lofty founding vision of the nation. We remember that the man who wrote the words of the Declaration of Independence was himself a Virginia owner of slaves who also wrote these words,

“I tremble for my country when I reflect that God is just; that his justice cannot sleep forever.” – Thomas Jefferson

Is it possible that the country will in this time of political crisis finally address some of the ugly and brutal truths of our history and move on to “form a more perfect Union”? Is it possible that in this time we in the U.S. will join in efforts to “more closely connect with integrity to the founding principles of our nation” and move toward the “justice” Thomas Jefferson only dreamed about? The unity and future health of the United States depends on it.