In a blog dedicated to “erasing borders” I want to address what force or forces serve to defend and strengthen national borders and border enforcement in the world.  Now is the time because increased migration of threatened people across borders, “free trade” agreements, new technologies, and more travel (among other factors) all call for easing traffic across borders.

It is a confounding paradox for citizens of the U.S., especially for those born in the country with a single cultural identity, to delight in being surrounded by persons of other cultures while the politics and political economy of the country fosters suspicion and enmity of other nations and cultures.  How could it be that a nation whose ideal self image, the ideal we grew accustomed to celebrating in our lives and in the life of the nation, has been that of a country leading in welcoming immigrants, how could it be that the same nation remains deadlocked on immigration reform for 35 years and focuses on combatting one enemy overseas after another?

Any attempt at a satisfactory answer to this question must consider some indisputable facts too long ignored.  For anyone following the news casually, regardless of the news source in this country, we are aware of the U.S. emphasis on national defense and security.  From the Defense Department budget, to television ads selling insurance for veterans, to conversations with those whose loved one is serving in the military, to statistics on the U.S. military’s footprint in over 80 other countries, we know this country is exceptional in equating military might with power and security.

What we don’t know and seldom talk about in our public forums is the effects on our loftiest ideals of our emphasis on preparation for war and conflict.  What we also don’t think or talk about much in our civil dialog is the interaction between production of weaponry and the health of our economy.

Histories of California’s economy all point to the manufacture of aircraft as leading the way in the State’s growth.  Its long Pacific sea shore has seen the rise of some of the largest and most important military bases during and following WW II.  When a few bases were closed in the 90’s, and major aircraft production sites shut down, there was deep concern about what would replace them in the  economies of the local communities and  the State as a whole. Today the strength of California’s economy should assure us that a transition from an economy relying on defense expenditures can benefit a state’s population

Following the “Great War”, as many in the U.S. now term WW II, the late Prof. Seymour Melman devoted his research and writing to bringing to light the potential boost of the national economy with a conversion from defense production to production of “things that make for peace”.  Despite his sterling credentials as a Columbia PhD in economics and his teaching at the same university until 2003,  there has been little support for Melman’s views except among left wing intellectuals and peace organizations.  He continues to be a “voice crying in the wilderness” in the political and economic discussion in this country.

Yet Melman’s case for such a conversion of the U.S. economy is more relevant today than ever.  In a 1990 interview with journalist Bill Moyers, Melman noted “there’s no mystery in the shabby railroads, the broken bridges, the unpaved streets, the wrecked buildings, the absence of adequate housing, the aging character of the industrial equipment.”  There is today more decline in U.S. manufacture of goods used by or benefiting individual consumers.  With 46 per cent of U.S. production equipment devoted to manufacture of weaponry in the mid-1980’s, Melman urged us to consider the impact on employment in manufacturing, on industrial research and development, on worker productivity and on wages among other measures of a healthy economy.

In highlighting the economic effects of this country’s production of goods individuals do not consume, Melman’s views also raise questions about the effect of arms production and sales on U.S. policies as a superpower.  How do arms sales abroad, we accounted for 37 % of the world total sales in 2020, affect our foreign policy? What about the influence of the arms industries (the Lockheeds, Raytheons, General Dynamics, etc.) on the military establishment strategies and our perpetual wars? What are the costs to the nation’s ideals and self image of selling vastly more weaponry than any other nation in the world? Finally and most urgently in our time, how does our focus on defense and arms production handicap our capacity to lead in renewable energy production and innovation?

While controversy rages in our politics over what to do about the climate crisis worldwide, the response to a global pandemic, and how to move toward a healthy multi-racial society there is little conflict in our politics on defense and security issues.  Consensus of the two parties on expanding our military and waging war for international conflict resolution seems guaranteed.

A few years ago a Cherokee Indian fable was widely shared.  A wise grandfather advises his grandson that there are two wolves inside all of us. One of the wolves is characterized by anger and fear and the other wolf is accepting and loving.   The two wolves fight within each of us.  So the grandson asks which wolf finally wins and the grandfather replies, “The one you feed will win”.  Despite its lofty ideals and grand achievement in the past, does anyone doubt which wolf the U.S. continues to feed today? What will be the consequences for the nation if the wrong wolf wins the battle within us?  What will be the consequences for the world? 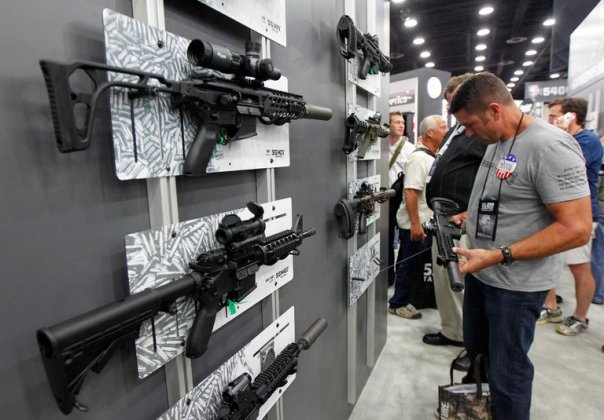 The Sig Sauer AR 15 model such as the one used in the Orlando shootings. John Sommers II photo, Reuters.

“They shall wander from sea to sea,
and from north to east,
they shall run to and fro,
seeking the word of the Lord,
but they shall not find it.” Amos 8:12

Last Saturday night June 11, Kate and I sat under a clear sky at Kansas City’s Starlight amphitheater swaying to the mostly familiar words of singer, songwriter Paul Simon and his band. Most of the audience joined in the last song of the second encore, “Sounds of Silence”:

“Silence like a cancer grows,
hear my words that I might teach you,
take my arms that I might reach you,
but my words like silent raindrops fell
and echoed in the wells of silence.”

Three hours after we sang “Sounds of Silence” at the concert, the gruesome siege of party goers exploded on the night in Orlando. As in most of the recent mass murders, the assailant used a military style assault weapon whose sale in the United States is not only legal but on the rise. While sales of other long rifles have risen 3% in recent years, sales of the AR-15 and other “modern sporting rifles” have risen 27%.

For whatever reason – the unprecedented number of victims, the evidence that loathing of gays dominated the perpetrator’s psyche, the steady recurrence of mass shootings making use of such weapons – there is renewed concern in this country over continued marketing and sales of the AR-15 gun model. Re-enacting in Congress the ban which expired in 2004, or passing a stronger ban with fewer loopholes, will not, however, be easy. The National Rifle Association (the NRA), the most powerful lobby working for gun manufacturers and gun retailers, now refers to the AR-15 as “America’s rifle”.

How could this be many of us are asking? How could a rifle which was originally manufactured as the M-16 for soldiers in the Vietnam War now be marketed to and widely purchased by civilians? How could the nation with the largest number of Jesus’ followers permit sales of a weapon which has killed dozens of schoolchildren, movie goers, co-workers and party goers in the last five years? 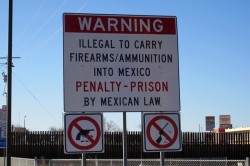 Sign at the U.S.-Mexico border in Texas. Photo by John Lindsay-Poland, Fellowship of Reconciliation

But the nearly unfettered sale of assault weapons to civilians in the U.S. may not be so surprising to our friends in Mexico. Since the Mexican Revolution at the turn of the 20th Century, the U.S. has supplied most of the guns for revolutionaries resorting to violence, for the Mexican army and police forces and for our neighbor’s criminals. An estimated seventy percent of the deaths during Mexico’s “drug wars” were due to weapons imported from the north. Signs at the border reminding visitors that it is illegal to bring guns into Mexico are a weak defense against the dangers resulting from Mexico’s proximity to the country which exports far more weapons than any other in the world. The well known saying, “Poor Mexico, so far from God and so close to the United States” has taken on new weight in the aftermath of 80,000 plus “drug war” victims.

In Mexico, research teams continue to pursue what really happened to the 43 students of Ayotzinapa. In the U.S. we know very well how 49 young people died in the Orlando nightclub. We may never know what primarily drove the killer to act but we know he acted alone that night and we know his primary weapon continues to be advertised using militaristic language like “get your man card” and “the opposition will bow down”. We know that using the AR-15 model Sig Sauer MCX he was able to fire into the night club crowd 24 shots in nine seconds. We know that in 2012 the Newton, Connecticut 20 year old who fired 154 rounds of bullets in less than five minutes in an elementary school killed 20 children and then killed his mother, who had purchased the Remington Bushmaster for him.

Lacking the sweet, high voice of Art Garfunkel at his side, Paul Simon did not sing “Bridge Over Troubled Water” at the concert last Saturday night. But thousands of people this past week in vigils around the world sung the lyrics in solidarity with friends and family members of the Orlando victims:

We who live in and love this country stand in gratitude for the words of solidarity, of comfort and consolation that have been offered by persons worldwide. But after this latest in a long list of horrific acts of violence suffered from San Bernardino to Orlando, from Roseburg, OR to Newton, CT, we also stand in need, seeking “the word of the Lord” for this nation at this time.

Senator Patrick Murphy of Connecticut stood in the U.S. Senate chamber this week speaking for 15 hours before Republicans consented to talks about acting on gun control legislation that remains pending. That legislation has to do primarily with background checks on those purchasing guns. None of it calls for reducing or outlawing sales of military style “modern sporting rifles” within the borders of the United States of America.