Watching Giant from This Side of the Wall

GIANT director George Stevens leaves no doubt where his political sympathies lie early on in the film. At the Thanksgiving dinner table at their grandparents’ home in Maryland, the three children under age five are wearing self made feathered head bands and commence bawling inconsolably when they learn the turkey is their beloved friend “Pedro”. The children identify with the Indians at the Thanksgiving meal but the film’s director identifies with the many Mexican workers at their ranch home back in Texas. The brutal living conditions of the Mexican-Americans along with the racist attitudes of the Texas ranchers are depicted glaringly and powerfully in the film. “It (GIANT), more than any other Hollywood film of its time …… directly addresses the great American dilemma, race, and its implications, and not from the familiar racist, white supremacist point of view” according to the IMDB (Internet Movie Data Base) biography of Stevens.

While watching the film for the first time this past week, I was stunned by the eerie relevance of the film’s graphic portrayal of the Texas ranchers’ views and behaviors, the grotesque lies and the dehumanization of both the perpetrators of racism and their Mexican-American targets. Throughout our viewing I became convinced that in throwing the covers off this racism and the ensuing conflicts within the life of one ranching dynasty family this film helps explain a lot about Texas politics today. In one example of its contemporary commentary, on her first visit to the workers’ village, the Maryland bred newlywed (Elizabeth Taylor) learns the fevered baby she holds in her arms would not be able to see a doctor. Sixty years after the movie was shot in South Texas, the State has the highest number of medically uninsured people in the U.S.

When the movie was shot in 1955, California was not a lot better than Texas in its treatment of Mexican American laborers and their families. That the State of the world’s movie making capital now can boast of recent progress toward medical care for the poor, protection of the environment, ethnic inclusiveness and welcome of the stranger can be in part attributed to the impact of Hollywood, its films and its fortunes, on the State’s and the Nation’s politics. The movie gives a happy ending to the story of what had been a lock step conservative dynasty’s grip on the future. It’s a thoroughly plausible ending that is yet to be seen reflected in Texas politics.

While verging on melodrama in its treatment of the James Dean character (the icon died before his Best Actor Oscar nomination for the role), GIANT is spot-on with its depiction of some of the characteristics of Mexican-American culture – its piety and close family ties, its love of country and willingness to sacrifice life and limb for it, its warmth and openness to all people, including the racist oppressors. The beauty and simplicity of the villagers’ little church brought tears to my eyes as an image chosen by someone with a deep love and appreciation of the character of its builders.

In summary, GIANT is a movie worthy of Jean Luc Godard’s statement that “cinema is truth shown twenty four times per second” (formerly the number of frames passing across the projector’s lens each second). There are some scenes in the film so true to the movie’s 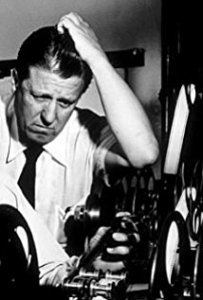 characters and to the life of human beings (the rancher family’s conversation in the hotel suite toward the end is one) we know this is film art that people will grow up with in the future. It’s the kind of movie that makes me, thankful to be retired and have the freedom to discover the courageous work of a great film maker, a true artist, who was devoted to realizing the potential of movies to bring people of all kinds and cultures together. George Stevens, like Charlie Chaplin and a few others, knew movies could play an important role in making this a more loving, peaceful world. This movie made me believe he succeeded.

POST SCRIPT: In the U.S. Army at the end of WW II, George Stevens filmed the Army’s liberation of Dachau and another German concentration camp. The film footage was entered as evidence at the Nuremburg trials of German war criminals and used in de-nazification trainings. Stevens’ bio on the IMDB web site notes that his War experiences “engendered in him the belief that motion pictures had to be socially meaningful to be of value”.

View a four minute sample of Stevens’ film record of the liberation of Dachau here: