Trump Vs. the UN

The United Nations was founded “to establish conditions under which justice and respect for the obligations arising from treaties and other sources of international law can be maintained” according to the UN Charter.

In speeches at the United Nations the last two years the President of the U.S. has defended national sovereignty and national interest as the pathway to global progress and prosperity. Choosing the forum created to foster global cooperation in the cause of world peace, economic development and human rights to extol national sovereignty highlights Trump’s heedless defiance of what makes for understanding and consensus building among nations. In a summary statement of his position, he declared in his September 2018 remarks, “We reject the ideology of globalism, and we embrace the doctrine of patriotism.”

This year in another September address, the U.S. President again attacked “the ideology of globalism” in the citadel of global cooperation. After acknowledging the UN as “the world’s biggest stage” in this year’s speech Trump chastised and bullied UN agencies on several fronts. He announced the U.S. withdrawal from the UN Human rights council, withdrawal from the UN Arms Trade Treaty, withdrawal of support for he International Criminal Court, and rejection of the Global Compact on Migration. In explanation of the last action he told the UN, “Migration should not be governed by an international body unaccountable to our own citizens.”

U.S. opposition to the global pact on migration stems in part from the U.S. administration’s hostility to references to a human caused climate crisis as a cause of increased migration. A leaked email of a U.S official working for the UN’s International Organization for Migration (IOM) warned of U.S. cuts in funding for the agency. The US appointee stated the IOM policies and positions “must not be in conflict with 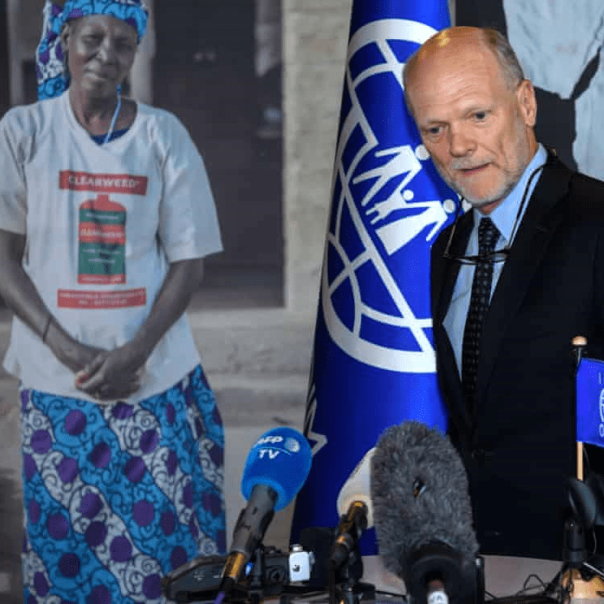 U.S. nominee Ken Isaacs was rejected to be head of the International Organization for Migration (IOM) after he made social media comments about the “hoax” of global climate change. Photo: Martial Trezzini /EPA

An article in The Guardian newspaper of September 11 links the warning to the rejection by UN officials of the Trump administration’s nominee to be head of the IOM. Most reports concurred that Ken Isaacs’ failure to be approved was due to his denials of human caused climate change. The Guardian noted that the U.S. has been contributing one fourth of the IOM budget.

Just this week, on November 4, the current U.S. Administration officially withdrew the wealthiest nation in the world from the Paris climate Accord. As the only developed country to give precedence to increasing fossil fuel production over reversing the ongoing climate catastrophe, the U.S. has now formally ceded its leadership role on the “world’s biggest stage”. The action is the most dramatic and decisive declaration that the U.S. considers its “national interest” the priority above the survival of coastal communities and survival of the human species.

Trump’s two speeches at the UN communicate his administration’s determination to pursue its nationalistic, “America First” ideology in its international relations. They ignore that progress in protection of the environment, in advancing world peace, international human rights and combatting world poverty all demand the consensus, compromise and understanding of other nations for which the UN was created. No nation, including the most powerful, can provide solutions to the world’s ills without cooperation and collaboration with other UN members. The bluster and aggressive unilateral actions of the U.S. in its foreign policies today are also a primary threat to world peace.

Having warned that the U.S. will not pay more than 25 per cent of the UN’s peacekeeping operations in last year’s speech, Trump boasted in this year’s speech of increased funding of the U.S. military. In an introductory segment of his remarks, he declared that the U.S. has “spent over two and a half trillion dollars since my election to completely rebuild our great military”. Such muscle flexing begs the question of whether excessive military expenditures and pride in U.S. military might have deluded foreign policy makers of this and previous U.S. administrations.

Perhaps the most revealing segment of the speech this year came at the beginning when Trump stated, “The essential divide that runs all around the world and throughout history is once again thrown into stark relief. It is the divide between those whose thirst for control deludes them into thinking they are destined to rule over others and those people and nations who want only to rule themselves.” Since the United States played such an important in the UN founding in 1946, its continual expansion of its armaments and military might suggest that our country has crossed over the divide Trump mentioned in the conviction we are “destined to rule over others”. The U.S. has deployed active troops in over 150 countries in the world and maintains bases in 38 nations today.

Posted on November 7, 2019, in U.S. Political Developments and tagged National Soverignty and International Agreements, Trump at the UN, U.S funding of the UN, US withdrawal from treaty obligations. Bookmark the permalink. Leave a comment.