← Answering the Wall with Solidarity and Compassion
A Malnourished Democracy ?? → 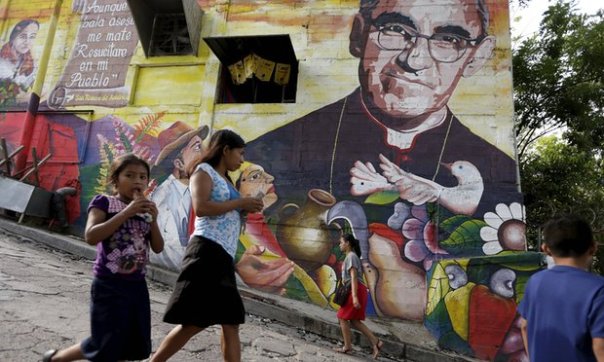 Mural on the outskirts of San Salvador includes the quote: “Whether they shoot me or however they kill me I will rise in my people”. Photo by Jorge Dan Lopez for Reuters

On March 25, 1980, during my lunch break from teaching English in Guadalajara, Mexico I strolled past jacaranda trees in bloom and while waiting for my tacos to be prepared bought a newspaper. On reading the bold headline I knew that the news would somehow deeply afffect my life.

I had followed the rise of the Sandinistas in Nicaragua and their overthrow of the Somoza dictatorship. On reading “Archbishop Romero Killed in San Salvador” I knew the armed struggle against the oligarchy in El Salvador would now rage more intensely in that small country. I also knew that the U.S. CIA, diplomats and the Army’s School of the Americas had played a major role in preparing the Salvadoran army and intelligence officers to defend the rule of the Salvadoran elite.

What I did not know or anticipate was that the war in El Salvador would cause thousands of young men to flee conscription by the guerrilla forces or the government’s Army and arrive in Tucson where I would be living three months after reading the news of the Archbishop’s death. Helping organize Tucson First Christian Church’s aid and refuge for the Salvadoran refugees brought me greater understanding of what is driving migration to the U.S. in these times and guided my return to the wellsprings of Christian faith.

Since graduating from seminary and ordination as a minister of the Christian Church (Disciples of Christ) thirty years ago this year, I have kept these words of Archbishop Romero near my desk: “I simply want to be the builder of a great affirmation, the affirmation of God who loves us.”

This month hundreds of people gathered on the Mexican border south of Tucson to express solidarity and compassion for those forced to flee their Central American homelands still wracked by authoritarian rule by the elite. Among other things they paid tribute to the courageous young Honduran woman Berta Cáceras who had organized opposition to transnational corporations threatening the environment and the people of her country. Like the Archbishop she was assassinated early this year.

The following report on the gathering at the border in Nogales, Arizona is by Scott Nicholson who serves the Hogar de Esperanza y Paz (House of Hope and Peace) in Nogales, Mexico. Scott’s volunteering is made possible by the Global Ministries of the Christian Church (Disciples of Christ) and United Church of Christ.

Hundreds of people gathered on both sides of the border wall that separates Nogales, Sonora from Nogales, Arizona on October 8 and 9. The convergence was organized by SOA Watch to protest the militarization of the border that is causing so much suffering and death for our migrant sisters and brothers.

This militarization was started by Bill Clinton and has been further escalated by Barack Obama. A “crisis” of unaccompanied minors that were fleeing violence and poverty in Central America and seeking refuge in the U.S. occurred during summer 2014. The response of the Obama administration was to pressure the Mexican government to further militarize its southern border with Guatemala. Millions of dollars were given to implement Plan Frontera Sur (Southern Border Plan) which placed more immigration agents and checkpoints in southern Mexico. 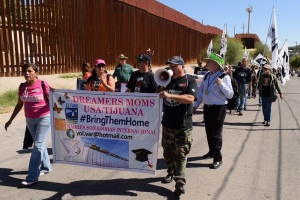 The binational organization “Dreamers’Moms” marches at the Convergence in support of their children’s dream of getting an education in the U.S.

Sister Guadalupe; of the Hermanos en el Camino shelter in Ixtepec, Oaxaca; told us that the militarization in southern Mexico has forced migrants to pass through more isolated, and dangerous, regions. She said that nine of every ten migrants arriving at the shelter have been assaulted, and more than half the women have been raped. Mexico is now deporting more Central Americans than the U.S., and this repression and violence have reduced the number of people arriving at the U.S. border.

“I very much appreciate Mexico’s efforts in addressing the unaccompanied children who we saw spiking during the summer,” said Obama in January 2015. “In part, because of strong efforts by Mexico, including at its southern border, we’ve seen those numbers reduced back to much more manageable levels.”

The Nogales Wall was first built by the Clinton administration in October 1994 – just three months after he visited the site of the former Berlin Wall. The Obama administration built a taller, and stronger, border wall in the summer of 2011.

“We celebrate unity,” Clinton had said in Berlin. “We stand where crude walls of concrete separated mother from child, and we meet as one family. We stand where those who sought a new life instead found death. Berliners, you have proved that no wall can forever contain the mighty power of freedom.”

The Clinton administration created the Border Patrol’s first national strategy in 1994, “Prevention through Deterrence.” The goal was to “Raise the risk…to the point that many will consider it futile to attempt illegal entry… Illegal traffic will be deterred, or forced over more hostile terrain, less suited for crossing.” Since then, the bodies of more than 6,000 people have been found in the southern border region. The actual death toll is much higher because many bodies are never found.

Last month, we commemorated the 15th anniversary of the attacks of September 11 and I found myself reflecting on how we define terrorism. It seems to me that terrorism involves the use of violence, targeting civilians, to achieve a political objective. Thousands of civilians have now died after being forced over hostile terrain along the border in order to deter people from entering the U.S.

“No más, no more, tear down the border walls!” we chanted during the litany for those victims at the end of the convergence here in Nogales.

In Love and Solidarity, Scott Nicholson

Scott’s report is from the web site of Global Ministries: http://www.globalministries.org/border_convergence

For an excellent article on the background to Archbishop Romero’s assassination and the recent beatification of the Archbishop by Pope Francis go to:
https://www.washingtonpost.com/news/worldviews/wp/2015/02/05/why-its-such-a-big-deal-that-oscar-romero-was-declared-a-martyr-by-pope-francis/

The blog title harks back to an ancient Church history document, The Address to the Emperor Diognetus reporting on the lives of third century Christians in Asia Minor: “They live in their native lands but like foreigners…They take part in everything like citizens and endure everything like aliens. Every foreign country is their native land and every native land a foreign country…. They remain on earth but they are citizens of heaven.” Kate Moyer's wedding present to Doug Smith of a dancing jester figure bore the quote, “I like geography best, he said, because your mountains and rivers know the secret. Pay no attention to boundaries.” They dedicate this blog then to helping bring about the day when human beings share the resources of the planet equitably and without borders. Our geography experience features childhoods in the Midwest. Kate lived for over twenty years as an adult in the small town of Neodesha, Kansas while Doug has been an urban dweller all his adult life. She is able to readily identify most crops and keeps a close watch on her partner’s snob tendencies. The Nile Valley of Egypt, for Kate, and the Congo rainforest for Doug have left deep marks on their interior landscapes.
View all posts by erasingborders »

Posted on November 6, 2016, in Uncategorized and tagged 2016 Border Convergence demonstration, Forces driving immigration to the U.S., School of the Americas action. Bookmark the permalink. Leave a comment.

← Answering the Wall with Solidarity and Compassion
A Malnourished Democracy ?? →