So Near and Yet So Far 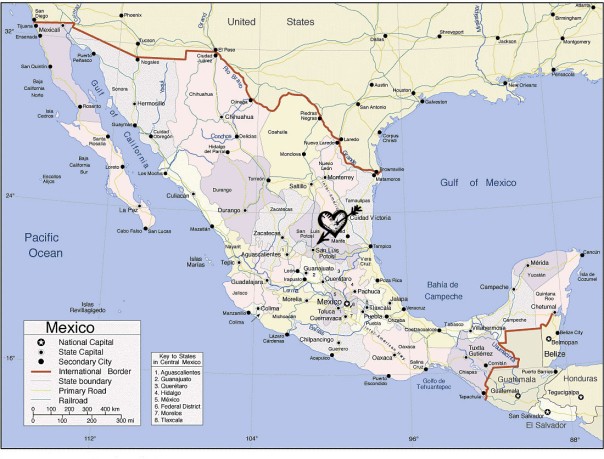 Capital of the Mexican State of the same name, San Luis Potosi counts over a million residents in the metro area and has an elevation of 6000 feet

Although we’re only going a little farther than from our home in Pomona, CA to Kansas City, there’s so much to do to prepare for our move to San Luis Potosi.  So many complicating decisions when you’re leaving the country – enter Mexico with the readily issued Tourist Visa or go all out now for the temporary resident FM 3 visa? How make sure we receive important surface mail?  How much to take when movers charge at least twice as much when it’s an “international” move?

Some of the anxiety, no a lot actually, was relieved by finding renters of our house who need to use our furniture and housewares.  A young Samoan couple newly arrived for an M.A. at Claremont seminary will move into a fully furnished house.  With another Claremont student occupying the little house in back, the rental arrangement appears ideal for all of us.

Kate’s cousin has volunteered to be our L.A. “angel” who will send packages of our mail to us. And a Congregational layman in Guadalajara, a Mexican customs agent, has advised us to wait on the resident visa until after we arrive.  So now we can deal with questions like how to keep up on U.S. news – and the end of the baseball season while out of the country.  After relying in Mexico on internet subscriptions to keep up on U.S. and international news, our daughters just may be impressed.

Although we keep coming up against the complications of a cross border move – like the fact our mail cannot be forwarded – we have been reminded again and again of just how close we already are to Mexico and how many of our neighbors here have ties to people there.  No one we’ve met has had a discouraging word to say about the place we’re moving to.

At the doctor’s office recently, a stranger heard me tell a friend we’ll be living in San Luis Potosi.  “Oh, you’ll love it there” an Anglo man in his forties interrupted.  “My wife’s family lives there”.  Our gardener enjoyed telling us he used to work with his grandfather in the city of less than a million in central Mexico.

Even in Kansas, with fewer Mexican-Americans than in our L.A. area, we’ve met people with connections to San Luis Potosi.  When Kate officiated at her sister’s wedding in June, Jeanne’s friends in charge of decorating the church nearly exulted in recalling their experience of Mexico.  “My late husband was from San Luis Potosi and we used to go almost every summer” the friend declared.  Her daughter interjected, “We haven’t been for a few years and I really miss going”.

After our week in July of sampling some of the unusual and delicious Potosina regional cooking, marveling at the beauty of the old downtown and meeting some wonderful people, we are excited to return to San Luis Potosi in mid October.  News of how we make it there with two dogs, a cat and all we consider helpful for our two year assignment will be featured in the blog post after our arrival.

On our 1700 mile plus drive to San Luis Potosi, Doug will enjoy singing – Kate hopes it will be brief – the first Spanish song he learned a few years ago that ends with the verse,

This song “Yo ya me voy” is one of the Mexican folk songs on the superb Folkways album “Traditional Songs of Mexico”  (FW 8769) issued with notes and English translation of all the songs.

Because I don’t belong here.

My loves are far away from here,

They are in San Luis Potosi.”

NOTE: To listen to a sampling of “Yo, ya me voy” and other Mexican folk songs on this fine Folkways album go to:

Posted on September 22, 2012, in Uncategorized and tagged "Yo ya me voy". Bookmark the permalink. 6 Comments.